We kicked off the month looking at the successful transition of Burns and Allen from radio to television.  There were many shows that couldn’t make the leap to the small screen, and several that did very well like The Jack Benny Show and I Love Lucy. Our Miss Brooks not only had a successful radio show, but when their television show debuted, the radio show kept going. Many of the cast members starred in both mediums. In addition, they made it to the big screen with a movie and a comic book.

So, what enabled Our Miss Brooks to do what many shows could not?  Let’s look a little closer at the series and the behind-the-scenes work that kept the show on the air for four seasons, producing 130 episodes.

Connie Brooks (Eve Arden) is an English teacher at Madison High. She and her principal, Mr. Conklin (Gale Gordon), do not always see eye to eye, but she is close to his daughter Harriet and Harriet’s boyfriend Walter (Richard Crenna) who gives Miss Brooks a ride to school. She wants to be close to Mr. Boynton (Robert Rockwell), the science teacher, but he is oblivious to her charms. She rents a room from Mrs. Davis (Jane Morgan) where she lives with Mrs. Davis’s cat, Minerva.

We also get to know Fabian “Stretch” Snodgrass (Leonard Smith), basically a “dumb jock” who is Walter’s best friend and Daisy Enright (Mary Jane Croft), another English teacher who is Connie’s love rival for Mr. Boynton.

The show debuted July 19, 1948 on the radio. The show program was sponsored by Colgate-Palmolive-Peet for its entire run which ended in 1957. The first choice for Miss Brooks was Shirley Booth, and the show was titled “Our Miss Booth.” In Gerald Nachman’s book Raised on Radio, he states Booth concentrated too much on the disadvantages of being a school teacher to be funny. There is an audition with her from April of 1948 and while she sounds pleasant, she doesn’t have the sarcastic wit of Arden. The television show began in 1953 and was sponsored by General Foods.

Our Miss Brooks was a ground-breaking show featuring a single woman (teachers were usually single, and marriage might have ended her career). She was not a scatterbrained female like Lucy or Joan in I Married Joan, and she was not a housewife like June Cleaver or Donna Reed. She was a bright, attractive working woman. Eve remembered her third-grade teacher fondly and tried to give Miss Brooks some of her qualities. Eve was known for her sassy movie roles; one of the things she appreciated about the character of Connie Brooks was that it allowed her to be a warm, fun-loving person who had a self-deprecating side.

The show was a Desilu Production, so they shared equipment and crews with I Love Lucy, as well as a director (William Asher) at times, to save money.

The show was funny because it is based on believable characters. Connie Brooks has a great sense of humor. Many of the plots involve misunderstandings or her trying to keep Walter out of trouble with Mr. Conklin. Here are a few episode summaries.

Miss Davis unknowingly uses school funds to buy Connie a new dress. Now Connie must sell the dress to return the money. Mr. Boynton even models the dress for the kids.

Mr. Boynton asks Connie to play the role of Mrs. Boynton. She is thrilled,  imagining what it could lead to, until she realizes he meant his mother, not his wife.

Walter is listening to his home-made radio. Storm warnings come over the air for Bombay. Miss Brooks mistakenly thinks it is for their area and takes precautions to evacuate the school and prepare for a hurricane.

Mr. Conklin is furious when his bike is taken at the grocery store, and he wants the thief punished. Miss Brooks finds out that a poor boy borrowed it for his birthday and then returned it to the store. She goes to great lengths to protect the youngster.

Radio Mirror magazine nominated Eve Arden as the top-ranking comedienne two years in a row for her characterization of Miss Brooks. The National Education Association recognized her for her sympathetic portrayal of teachers. Eve Arden had to fight the same battle many celebrities do when they have a hit show. She handled her fame of being known as Miss Brooks with grace and practicality. As she explained it: “I originally loved the theater. I still do. And I had always wanted to have a hit on Broadway that was created by me. You know, kind of like Judy Holliday and Born Yesterday. I griped about it a little, and someone said to me, ‘Do you realize that if you had a hit on Broadway, probably 100 or 200,000 people might have seen you in it, if you’d stayed in it long enough. And this way, you’ve been in Miss Brooks, everybody loves you, and you’ve been seen by millions.’ So, I figured I’d better shut up while I was ahead.”

While the TV series never resolved the Boynton-Brooks romance, the 1956 film did. It was directed by Al Lewis, who directed many of the television episodes. In the movie, Miss Brooks is unaware that Mr. Boynton is saving money, so he can ask her to marry him. He is hoping to get a promotion to head of the department. In a subplot, Connie is having issues with a student who is failing her class. He has no friends because he is very arrogant. When she meets his wealthy father, she understands why he has no friends and she tries to help him.  Also, Mr. Conklin is running for Coordinator of Education, primarily to stop the other nominee, Superintendent Stone, who has threatened to fire Conklin. Miss Brooks decides to be Conklin’s campaign manager despite her butting heads with him most of the time. If Conklin wins, Mr. Boynton might be promoted to principal. In the end, Boynton finally proposes, only to have a chimpanzee steal away the ring. 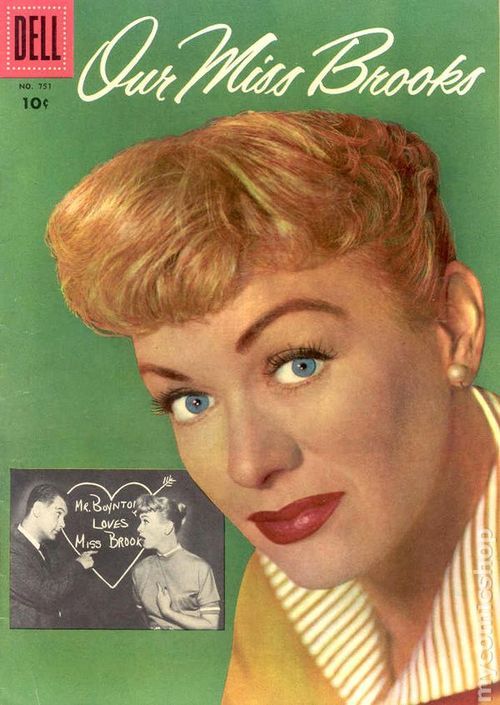 The movie was a box-office failure. After the movie, Dell Comics released a comic book titled “Our Miss Brooks.” In past decades, it sold for hundreds of dollars in mint condition. Today it can be found on ebay for under $50.

A fun fact I learned was that Eve Arden was born Eunice Quedens. When she was encouraged to take a different stage name, she looked over her cosmetic jar labels. She picked “Eve” from “Evening in Paris” and “Arden” from “Elizabeth Arden.”

While many of the plots for Our Miss Brooks are predictable and not overly creative, it was a innovative sitcom. The scripts were well written, and the humor still works today. I could not find any channels currently broadcasting Our Miss Brooks, but it does appear on Me TV from time to time. The radio shows can be heard on Sirius Radio, channel 148. Of course, there are a variety of DVDs featuring the show. Add it to your list to understand why Eve Arden was so popular with women in the 1950s.

4 thoughts on “The Teacher We All Wished We’d Had: Our Miss Brooks”