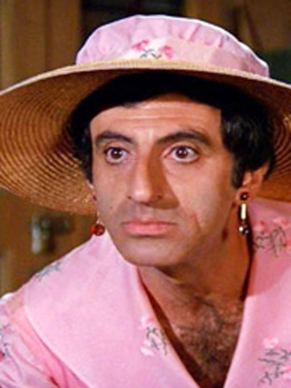 Jamie Farr was born Jameel Joseph Farah on July 1, 1934 in Toledo, Ohio. His mother was a seamstress and his father a grocer. They attended the St. George Antiochian Orthodox Church.

He graduated from Woodward High School with honors and was named most outstanding student. In addition to writing and acting in two variety shows, he was a member of the Drama Society, class president for three years, feature editor of the school newspaper, president of the radio class, manager of the football and basketball teams and a member of the varsity tennis team.

Before becoming a successful actor, he worked for a lithograph company, a post office clerk, an army surplus store clerk, an airline reservations clerk, and at a chinchilla ranch. 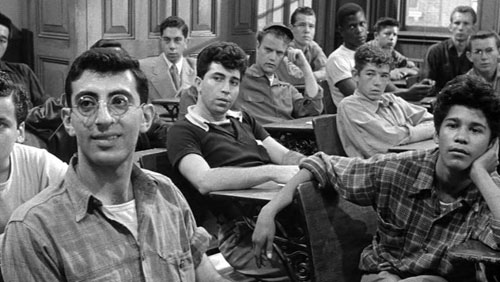 After graduation he attended the Pasadena Playhouse where a Metro-Goldwyn-Mayer talent scout discovered him, offering him a screen test for Blackboard Jungle. He won the role of the mentally challenged student, Santini. He was drafted by the United States Selective Service into the United States Army, undergoing his basic training with the 6th Infantry Division, Fort Ord, California, he served for two years, with service in Japan and Korea. The dog tags he wore on M*A*S*H were his own. (Alan Alda also served as a gunnery officer in Korea.)

In 1958, Warner Brothers cast him as the co-pilot of a TB-25 in the Andy Griffith military comedy No Time for Sergeants, which also brought the young TV comic Don Knotts to motion pictures. Farr appeared as Thaddaeus in the 1965 film The Greatest Story Ever Told, along with minor roles in Who’s Minding the Mint? and with future costar William Christopher in With Six You Get Eggroll. He would also appear in Cannonball Run and Cannonball Run II. 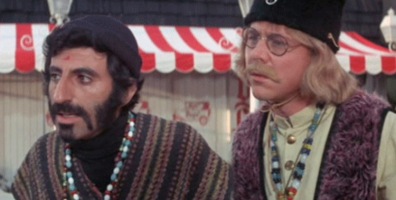 In the late 1960s, he became a regular on the Red Skelton Show. He appeared in a variety of shows in the 1960s including Hazel, My Three Sons, Donna Reed, The Dick Van Dyke Show, I Dream of Jeannie, My Favorite Martian, Get Smart, Gomer Pyle, The Flying Nun, and Family Affair. Farr received roles in several commercials as well, including an ad for Wonder Bread where he says, “If it isn’t fresh, I’m outta business.” 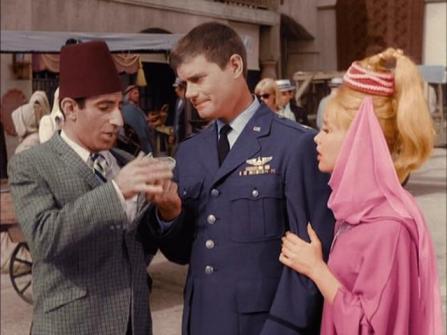 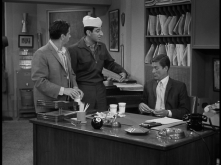 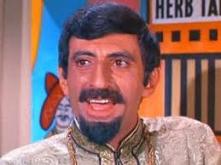 During this decade, he also married Joy Ann Richards. They are still married and have two children.

He continued his television acting career through the 1970s appearing on a variety of shows including Room 222, Love American Style, Toma, Emergency, Barnaby Jones, and The Love Boat.

In October of 1972, he was hired to appear on one episode of M*A*S*H as Corporal Klinger. He wore women’s clothing, hoping to be discharged from the Army for a Section 8 discharge. He was asked back for the second season to appear in 12 episodes and became a regular cast member in the fourth season. When Radar left the show, and Klinger took over as Company Clerk, he stopped being fashionable and returned to uniforms. He said he did not want his kids to be made fun of because of his cross dressing. He was a resourceful and kind soldier. His character on the show was also from Toledo, and he often mentioned one of Farr’s favorite restaurants, Tony Packo’s Hot Dogs and talked about his love for the Toledo Mud Hens. (In 2017, he was inducted into the Mud Hens Hall of Fame.  A bobble head was given to the first 2000 fans to the game that night.) He continued with M*A*S*H until 1983 when it left the air.

Along with Harry Morgan and William Christopher, he appeared in After M*A*S*H for two years. The show never got the fan base the original show had and was cancelled after 30 episodes. 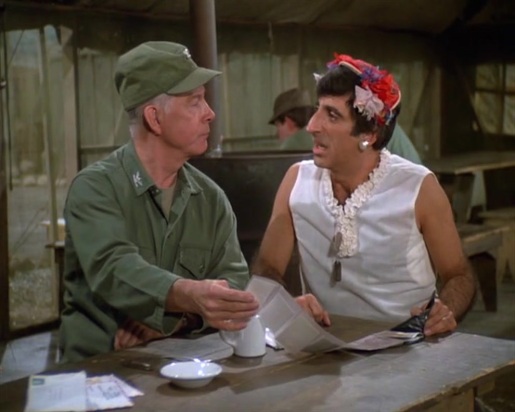 The cast of both M*A*S*H and After M*A*S*H were very close. On the death of Harry Morgan, Farr commented, “Harry was very special to all of us cast members. Not only was he a wonderful performer that made such a difference … he was a dear friend to every cast member. He was absolutely a pixie, a gremlin as mischievous as all get out. You couldn’t be around Harry for very long without wanting to embrace him and I think our Lord will feel the same way.”

He also commented on William Christopher’s passing: “We are all devastated by our beloved Bill’s passing. I have known him for over 50 years. During the 1960s we lived in the same neighborhood in Studio City. My Joy and I would see him and his wife Barbara going for walks as we were going for walks. Bill and I did the very last Doris Day movie together, With Six You Get Egg Roll. We were both cast in the tv series M*A*S*H at almost the same time. He was a gentle soul and, in my opinion, probably the most under rated actor of all of us on the show. He was wonderful. During between set ups for camera angles Bill would read his Homeric book in Homeric Greek. He was a real egg head. He and his Barbara traveled the world and he would try to learn the language of the countries they were going to visit. He went to Egypt one year and tried his Arabic on me. He was better than I was. We used to imitate Bill on the set using his high-pitched voice. One time he came down with hepatitis, and when he returned to the series we had his actor’s chair painted yellow. Bill and I did a National Tour of the play “The Odd Couple” with Bill portraying Felix and me doing Oscar, Bill was at one time on the Board of the Devereaux Foundation for Autistic Children. It was a real honor to have had him and Barbara as friends and a great honor to have shared the tv screen with this gracious, talented and charming soul. May his memory be eternal. Rest in Peace Father Mulcahy.” 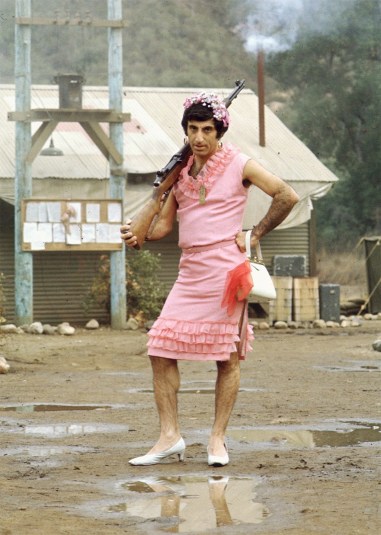 Like many celebrities who were typecast in a specific role, Farr realized there were advantages and disadvantages to his fame. He said that “the benefits from stardom as Klinger outweigh any setbacks. It’s a double-edged sword. What makes you famous is what interferes with getting other roles. But there are things that never would have happened without M*A*S*H. There certainly would be no Jamie Farr Kroger Golf Classic.” 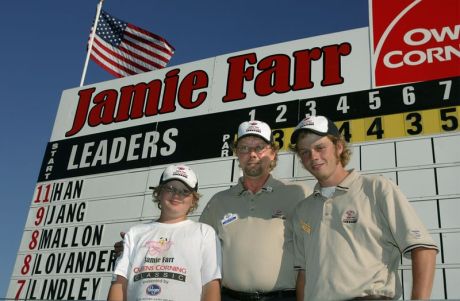 Farr has always been generous with his hometown. The golf classic he discussed above is now the Jamie Farr Owens Corning Classic. The tournament has raised more than $6 million dollars for local children’s charities.

The city has shown its love for Farr as well. The park in Toledo where Farr used to hang out when he was younger was renamed “Jamie Farr Park” in his honor on July 5, 1998. About the park, he said, “I wanted to be an actor, a famous actor, and I wanted my hometown of Toledo, Ohio, to be proud of me.” Farr spoke to about four hundred admirers and was quoted in the New York Post: “Jamie Farr Park is certainly a highlight of my life and career.”

Farr also made a gift of his scripts to the University of Toledo. The scripts were from movies and television, including M*A*S*H, After M*A*S*H, The Blackboard Jungle, With Six You Get Eggroll, No Time for Sergeants, Who’s Minding the Mint, among others. He also donated call sheets with each script. Call sheets list the personnel and equipment needed for each day of productions, the scenes being filmed, shooting schedules, and the scenes to be filmed.

Farr has also appeared in plays during the second half of his career. In the 1990s, Farr  played the role of Nathan Detroit in a Broadway revival of “Guys and Dolls.” Farr is still active in regional theater and guest-stars occasionally on television. 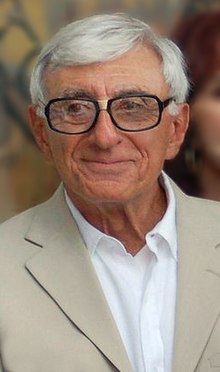 In 1996–97 Farr went on a national tour with “The Odd Couple,” playing Oscar Madison, playing opposite his old friend William Christopher in the role of Felix Ungar.

Most recently he was in the national touring production of “Say Goodnight, Gracie,” a one-man show about longtime entertainer George Burns.

Farr has also tackled being an author. In 1994, he published his autobiography, Just Farr Fun. With his wife, he also wrote a children’s book, Hababy’s Christmas Eve, a Christmas book where the story is told from the view point of the animals.

Jamie Farr has had a successful and fun career. He has been a movie star, a television celebrity, an author, and a Broadway performer. He was not bitter about his role as Klinger but accepted the benefits that came with it and made the most of it. He has also been generous, raising money and publicizing Toledo. He truly sounds like a very nice man. It was fun to learn more about his life.

3 thoughts on “The Actor Who Always “Dressed” Up: Jamie Farr”