Love is definitely in the air; whether you think it smells rancid or fragrant depends on your current relationship status.  Remember those days when everything hinged on what type of valentine your current crush gave you at the school party?  Love seemed to be the answer to all questions.  We’re going to look at some classic (and not so classic) television shows that promoted that kind of love.  Sorry, I can’t tell you if that pain you’re feeling is cupid’s arrow as it hit you or heartburn, but I can share some information with you as we learn about shows with “Love” in the title.

Love That Bob (1955). Bob Cummings played ladies’ man and photographer Bob Collins.  His widowed sister, Rosemary Decamp, and nephew (Dwayne Hickman) also lived with him. Before she moved in with the Bradys, Ann B. Davis was Schultzy, Charmaine Schultz, Bob’s assistant, who was in love with him.  Every show opened with Bob holding a camera and saying, “Hold it! I think you’re going to like this picture.” The beautiful Joi Lansing was another model who also was in love with Bob, but he was having too much fun playing the field.  When he never accepted Joi, we knew deep down in his heart, he realized that Schultzy was the one for him. While Bob couldn’t decide on only one woman, the networks couldn’t decide on only one channel for the show either.  It was on NBC Jan-May of 1955, moved to CBS for two seasons, moved back to NBC, and then finished up the last year and a half on ABC. I guess no one could remember where the show was supposed to end up after 1959, so it was cancelled. Bob was one of the first stars to play two characters in one show. Bob played himself and his grandfather Josh Collins. A decade later, Fred MacMurray would play Uncle Ferguson in addition to Steve Douglas in My Three Sons.

Love That Jill (1957). Rival managers of modeling agencies are played by real life couple Anne Jeffreys and Robert Sterling who had played the married ghosts on Topper.  I guess they spooked the network because they disappeared after three months.

Love and Marriage (1959). Now we know what Uncle Charlie really did before he moved in with My Three Sons.  He owned a music publishing company that was close to bankruptcy.  William Demerest plays a business owner who brings his daughter into the company as a partner.  She and her lawyer husband also move into his house.  She loves rock and roll; her father hates it, but it might save his company. The network shut down the agency after four months to promote family harmony.

The Many Loves of Dobie Gillis (1959). This show was based on a 1953 book and it was the first television series to feature teenagers as the main characters. I guess when Dwayne Hickman lived with Bob Collins, he picked up a lot of tips for the ladies, and as high schooler Dobie, he spent most of his time trying to find a girl to go out with and some money to pay for the date. Since his family owned a small grocery store, he was on his own for finances. Once he graduated, the show had to come up with new situations, so Dobie was in college for a couple of years as well as the army for a year. Dobie would go to the Rodin’s Thinker in the park and talk to us and himself about his love life. His best friend was beatnik and bongo player Maynard G. Krebs.  Bob Denver played this role before he went on to star in Gilligan’s Island.  He had never acted before this show; he had been a grade school teacher, and his sister, who worked for the casting department, included his name in the auditions. Super smart Zelda Gilroy was in love with Dobie.  We knew he would eventually end up with her, his own Schultzy.  She always wrinkled her nose at him and before he could stop himself he always did it back. In later years when they did two reunion movies, Dobie and Zelda were in fact married.  Sheila James, who played Zelda, became a California senator.

During the first season, Dobie thought he was in love with Thalia Meninger played by Tuesday Weld.  Thalia only liked Dobie when he had money which was not often. In real life they did not get along, and she left after the first season. Another character who disappeared after the first season was his brother Davey Gillis who was played by Hickman’s real brother, Darryl. Dobie also suffered through Milton Armitage played by Warren Beatty and then Chatsworth Osborne Jr. (Steve Franken) who were his arrogant, wealthy competition. Some of Dobie’s many girlfriends included Marlo Thomas (who became That Girl), Sally Kellerman (who was Hot Lips in the M*A*S*H movie), Ellen Burstyn (starred in many movies), Barbara Bain (who would be in Mission Impossible), and Yvonne Craig (before she was Bat Girl). Two interesting things I learned about this show was that DC Comics created a comic book series of 26 issues about the kids from 1960-1964. Also this show inspired the Scooby Doo Gang in 1969. Fred was based on Dobie, Velma on Zelda, Daphne on Thalia, and Shaggy on Maynard. Garry Marshall also reported that this was one of his main influences for his creation of the show Happy Days. After four years, I guess these kids were too innocent to handle all the crazy situations coming in the sixties and the show ended but has appeared in reruns often since it left the air.

Peter Loves Mary (1960). This couple, played by Peter Lind Hayes and Mary Healy, were married in real life. They play a show business couple who moved to Connecticut.  Luckily they have a housekeeper played by one of my all-time favorites Bea Benaderet who takes care of the house and children. Opposite the Green Acres viewpoint, Mary wants life in suburbia while Peter loves the city. The network didn’t want to weigh in on the argument so they took the show off the air after the first season.

Love On a Rooftop (1966). Judy Carne (pre Laugh-In days) and Peter Duel are a young married couple, living in San Francisco. He is an apprentice architect and she’s an art student, who gave up her dad’s money for love. Rich Little played their neighbor who designed restaurant menus, among other jobs. It was cancelled after one season.  Oddly, in the summer of 1971 it aired as a rerun show but never aired again.

To Rome with Love (1969). John Forsythe tries his hand in another sitcom.  In this one, he plays a widower who has accepted a job at an international school in Rome, and he heads for Europe with his three daughters.  His sister comes along the first season, mainly to try to talk them into going back home to Iowa.  For the second season, they gave her a one-way ticket home and brought Walter Brennan in as Forsythe’s father-in-law. The family lives in Mama Vitale’s boarding house.  After the second season, they all got air fare home and the show was done. Don Fedderson produced this show, and in the second season they had two cross-over episodes, one with the cast of Family Affair and one with Uncle Charlie, Robbie and Katie from My Three Sons.

Bridget Loves Bernie (1972). Bridget, played by Meredith Baxter, marries Bernie, played by David Birney.  The only problem is that she’s Catholic and he’s Jewish.  This would not even be noticed in today’s world, but in 1972 it caused quite a commotion. Her parents were wealthy and Irish.  His parents owned a deli and the couple lived above it. The ratings were very good–the fifth highest rated show, but they were cancelled after the first season anyway. It was the highest rated show to ever be cancelled, and the network finally caved into the pressure of public protests for having an inter-religious marriage. One fun fact is the Meredith Baxter and David Birney married in real life after this show was over.  However, that was before she came out of the closet, which created another mixed marriage . . .

Love Thy Neighbor (1973). This show was a summer replacement in the days of All in the Family.  Charlie Wilson, a shop steward at Turner Electronics, lives in LA. When new neighbors move in, not only are they black, but the new guy is hired as an efficiency expert at Turner.  The show explored how two couples of different races become friends.  The white couple was played by Ron Masak and Joyce Bulifant.  The black couple was played by Janet MacLachlan and Harrison Page.  The network didn’t love any of them because they sent them packing after 11 episodes.

Loves Me, Loves Me Not (1976). Jane, played by Susan Dey, fresh from the Partridge Family, is a teacher.  Dick (Kip Gilman) is a reporter.  They have a couple of dates with mixed results and aren’t sure if they like each other or not or should continue dating.  Dick’s boss and his wife are also characters on the show.  Apparently CBS decided it loved them not because they were cancelled after one month.

Love, Sidney (1981). If the network thought they had problems when Bridget loved Bernie, they really stirred up a hornet’s nest with this show.  Based on a movie, Sidney Shore, Tony Randall was the first person to play an openly gay character.  Sidney is an adman and lives with a young woman and her daughter, played by Swoosie Kurtz and Kalena Kiff. There were some heart-warming stories including two different episodes when both Sidney and Kurtz’s character had to make peace with less-than-perfect parents. Once again, the network gave into public dissatisfaction and cancelled the show midway through season 2.

Joanie Loves Chachi (1981). This show was a mid-season replacement.  Chachi (Scott Baio) left Milwaukee and Happy Days and moved with his parents (Ellen Travolta and Al Molinaro who had owned Arnolds’s malt shop) to Chicago.  He sang in a restaurant his family owned.  Because Joanie (Erin Moran) loved Chachi, she convinced her parents to let her go to Northwestern to be a nurse, but she spent more time singing with Chachi. Most of the shows involved one of them being jealous of the other and ending the fight with a song. In the first season this new show followed Happy Days and was a huge success. The second season it moved to Thursday and bombed in the ratings. The network sent both Joanie and Chachi back to Milwaukee after the second season where they continued on Happy Days until it went off the air in 1984.

Everybody Loves Raymond (1996). Ray Romano played sports columnist Ray Barrone.  He lived with his wife (Patricia Heaton) and kids, right across the street from his overbearing mother (Doris Roberts), cynical father (Peter Boyle), and jealous older brother (Brad Garrett). No one had any privacy on this street, but there were a lot of poignant episodes. We all knew everybody loved Raymond, but they also loved each other.  In 2004 after 9 seasons, the network decided not everybody loved Raymond, just most people, and they cancelled their sports subscription. 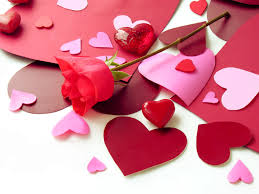 If you’re not crazy about love right now, apparently you’re in good company because the majority of these shows were cancelled within a year.  If you’re a hopeless romantic, you’re probably watching Everybody Loves Raymond on Nickelodeon. Happy Valentine’s Day, or not.