Today we are talking about the career of Paul Lynde.  Paul Lynde was an icon when I was growing up; he was probably best known at that time as the center Hollywood Square, the voice of Templeton the Rat in Charlotte’s Web, and Uncle Arthur on Bewitched.  His life encompasses both a unique and successful career as a comedian loved by many fans and the all-too-common saga of a star’s life ruined by drugs and alcohol. Many of the things you read about Paul Lynde concerning his behavior and cruel things he said to others are disheartening to a fan, but I learned that the characters I loved growing up (and continue to as an adult) are the characters, not the actors and actresses behind them.  With a few exceptions such as Fred MacMurray, Jimmy Stewart, or Cary Grant, most stars don’t live up to our illusions of them. Although truth be told, if someone studied our entire lives and wrote about them, there are probably parts of them we would not want the world to learn about either. I wanted to talk about Paul Lynde’s career, because although he was extremely well known during my youth, most young adults today probably have no idea who he is.

Paul was born in Mount Vernon, Ohio, one of six children.  His father was a local police officer and for a time, the family lived above the jail when his father was the sheriff of the jail.  Like many youngsters growing up in the 20s and 30s, he became interested in acting when he went to the movies  with his mother. The first movie he remembered was Ben Hur.  That interest propelled him to Northwestern University where he studied drama.  After school, he relocated to New York City where he worked as a stand-up comedian and then received a part in a Broadway show, “New Faces of 1952.” Alice Ghostley, who would be featured on Bewitched was also in the show. In 1963 he recorded a comedy album. From then on he was a popular guest, television star, and movie celebrity. His unique delivery of his sarcastic one-liners made him a popular entertainer.  There is not a lot of difference between the role of Uncle Arthur and his humor and delivery on Hollywood Squares. 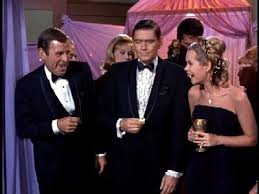 He starred in several television series including Stanley with Buddy Hackett and Carol Burnett where he played a hotel owner in 1956-57 and The Pruitts of Southhampton with Phyllis Diller in 1967. From 1965-71, he was on Bewitched where he played Harold Harold a driving instructor the first season and then became a regular in the role of Uncle Arthur, Endora’s brother.  Surprisingly, the character of Arthur only appeared in ten episodes of the series. After Bewitched, he starred in The Paul Lynde Show where he played an attorney with two daughters and a liberal-minded son-in-law. Stiller and Meara were also on the show which was done to satisfy his contract with ABC in place of the ninth season of Bewitched. The show was up against The Carol Burnett Show and Adam-12 so it was cancelled, but he was nominated for a Best Actor Golden Globe award. His last starring role in television was in New Temperatures Rising where he played a penny-pinching doctor running a hospital owned by his mother.

Paul appeared on Hollywood Squares for 15 years (801 episodes).  In addition to that game show, he accumulated 80 credits playing himself on a variety of shows including Donny and Marie, Password, The 10,000 Dollar Pyramid, Dean Martin Roasts, The Carol Burnett Show, The Mike Douglas Show, and on several Paul Lynde Comedy Hour specials.

He appeared on a variety of television shows – 33 in all.  In addition to those he starred in, he was also in The Phil Silvers Show, The Patty Duke Show, The Jack Benny Show, The Munsters, Gidget, F-Troop, That Girl, I Dream of Jeannie, The Mothers-in-Law, The Flying Nun, and three episodes of Love American Style.  Had he lived a few years longer, I’m sure we would have seen him cruising the ocean on The Love Boat.

In addition to his television work, he also appeared in 18 movies between 1956 and 1975. He and Dick Van Dyke were the only Broadway performers from Bye Bye Birdie to be cast in the movie version.  He was also in Beach Blanket Bingo, and two of my favorites, Send Me No Flowers and The Glass Bottom Boat, both Doris Day movies.

Although he was gay, he did not discuss his sexual orientation, and the media respectfully did not report on it either.  In 1965, his partner and companion Bing Davidson died. They had been out drinking and Bing thought it would be funny to pretend to dangle from a hotel balcony but fell to his death.  Whether this exacerbated his alcohol and drug problems isn’t known, but Lynde’s health suffered from his addictions and he was arrested for public intoxication frequently. In 1980 he went through a successful rehabilitation, becoming sober and drug free.  Unfortunately, the damage that was done to his body was extensive, and he died from a heart attack in January of 1982 at age 55.

Some other interesting facts are that he was friends with Elizabeth Montgomery and her husband William Asher, he purchased Errol Flynn’s Hollywood Mansion, he was a dog lover, and he was one person who was able to appear on The Ed Sullivan Show while singing a song from Bye Bye Birdie about being on The Ed Sullivan Show. He was also a chef and considered opening a restaurant. To see some of his recipes, visit www.paullynde.info.

To truly appreciate Lynde’s comedic personality, here are a few lines from Bewitched and Hollywood Squares.

To Endora, his sister, on  Bewitched:  “Endora when I think of you as a blood relation, I long for a transfusion.”

On Bewitched, telling a story, “Then I spent the summer hunting lions with the British expedition. One morning I shot a lion in my pajamas. Now, what he was doing in my pajamas, I’ll never know.”

Peter Marshall: According to Ann Landers, what are two things you should never do in bed?

Peter Marshall: According to the IRS, out of every 10 Americans audited, how many end up paying more taxes?

Before a cow will give you any milk, she has to have something very important. What?

Peter Marshall: Fred Astaire says, his mother has been trying to get him to do this since he was 35. But he hasn’t done it and says he won’t do it until he’s ready. Do what?

Paul Lynde: Move out of the house!

Perhaps the award that best sums up Lynde’s career was bestowed upon him in 1976 when he received the Entertainer of the Year Emmy for the funniest man of the year. If you don’t know much about Paul Lynde, check out some of the youtube videos from Hollywood Squares or watch a few of his episodes from Bewitched. Although not as well known today, his influence on present-day performers is wide spread and his career deserves to be remembered and celebrated.

2 thoughts on “I’ll Take Paul Lynde for the Win”