Last week we continued to paid homage to the Friday night schedule of shows airing in 1970 and 1971, learning about The Odd Couple. Today we continue that theme as we meet the cast of Room 222.

Debuting in 1969, Room 222 produced 113 episodes by 1974 when it was cancelled for low ratings. The show, one of the first dramedies, was a more serious counterpart to the later-seen Welcome Back Kotter. 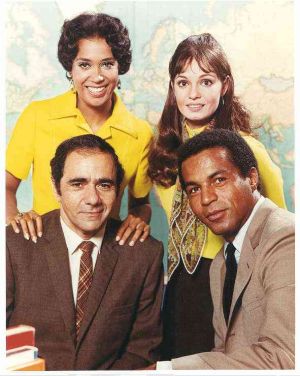 The series was created by James Brooks who wrote for That Girl and The Andy Griffith Show and would go on to create Taxi, The Mary Tyler Moore Show, Rhoda and Lou Grant. What all these shows have in common is a group of characters who have a depth and sophisticated writing that captures the realistic language and behavior of individuals in their settings.

The show featured Seymour Kaufman (Michael Constantine), the principal of Walt Whitman High School, a racially mixed school in Los Angeles; American history teacher Pete Dixon (Lloyd Haines); the guidance counselor (and Pete’s girlfriend) Liz McIntyre (Denise Nicholas); and student teacher Alice Johnson (Karen Valentine). The four staff members were friends, but they did not always agree.  They debated issues and solutions but always with respect. Kaufman displayed a dry humor and could make Dixon laugh. Dixon was the easy-going, wise, and insightful thinker in the bunch. Liz was compassionate while Alice was enthusiastic and idealistic, but a bit naïve. The staff members invest in the students, acting as surrogate parents teaching them important life lessons. The other staff member we get to know is Miss Hogarth (Patsy Garrett), Mr. Kaufman’s secretary. 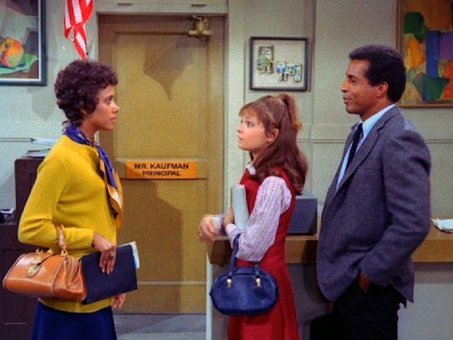 We also spend a lot of time with several students who interacted with staff members in the classroom and occasionally outside of school. There was Richie Lane the Brain (Howard Rice); Jason Allen, tough guy (Heshimu Cumbuka); Pamela, Miss Popular (Ta-Tanisha); Helen Loomis, shy but thoughtful (Judy Strangis); and Bernie, the sports jock and class clown (David Joliffe). Although students were a large part of the show, many episodes focused on the teachers and administrators.

Room 222 is Dixon’s classroom where the students are given free range to discuss topics from a variety of viewpoints.  Some of the issues were topical such as the Vietnam war, women’s lib, and Watergate; however, most of the debates could be pulled from today’s headlines:  race relations, shoplifting, drug use, illiteracy, police presence in schools, dress codes, guns in schools, and teen pregnancy. Dixon lets the students lead many discussions, but he preaches tolerance and the ability to see things from others’ shoes. He is respected and liked by his students. 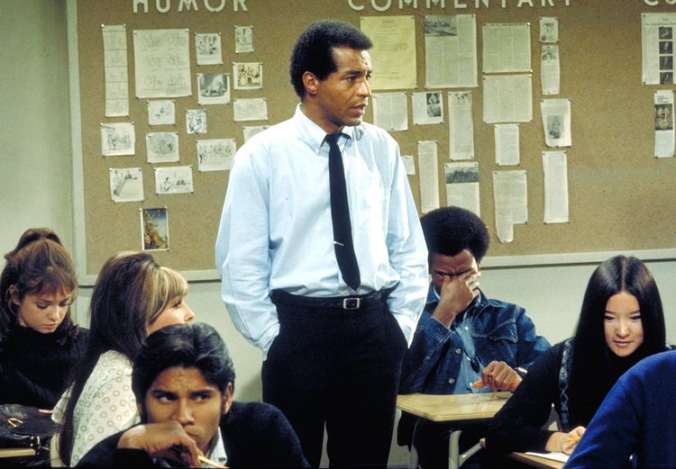 Imdb.com summarized the pilot episode as: Pete Dixon teaches history in Room 222 at Walt Whitman High School. Principal Seymour Kaufman introduces Pete to Alice Johnson, a perky but painfully insecure student teacher. Pete’s most enthusiastic student is Richie Lane, who goes so far as to dress a lot like Pete and even takes roll in his absence. But Guidance Counselor Liz McIntire has discovered some disturbing news about Richie — the home address he submitted is fake, suggesting that he may not live in the school district, and therefore might be ineligible to keep attending Whitman.

The first season used a laugh track which was not used for subsequent seasons, helping to add drama to the show. 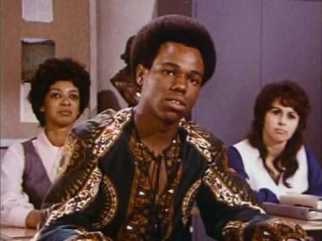 The theme song was written by Jerry Goldsmith. He would go on to be nominated for seven Academy Awards for music, winning for The Omen. A series of novels was created based on the show by William Johnston in the early 1970s, and Dell Comics published four issues about Room 222 in 1970-1971.

The show propelled Valentine to star status. Mark Voger interviewed her online for New Jersey Advance Media for NJ.com on October 25, 1970. Part of his article is quoted below:

“I had gone in to meet the casting person for ‘Room 222,'” the Santa Rosa, Calif., native told me during a telephone interview some years back.

Then I was called in again to meet with (series producer) Gene Reynolds. When you talk about naivete — the character of Alice Johnson was a bit of a bumbler and very naive and just wet behind the ears.

I looked up at him and I said, ‘I don’t know what’s going on. I’m really rather chic, you know. This is so strange.’ And he said, ‘Don’t change a thing.'”

Valentine believes she’d hit upon the essence of the character that Reynolds sought.

She continued: “After I read, I was leaving the office. He said, ‘Don’t get hit by a car.’ And I thought, ‘Boy, this is a good sign. It’s the first time anyone cared whether I was dead or alive in this town.'” . . .

“It was a real forerunner for integrated shows,” Valentine said. “It was the first show, I think, that showed blacks and whites interacting so well together, and role models in teachers and counselors. It was so well accepted that in certain parts of the country, ‘Room 222’ was required viewing by some of the teachers and principals and administrative staffs around different schools.”

While the hair-do’s and clothing tie the show to the early 1970s, the scripts could easily be part of current television shows. I’m not sure if that is positive because the show was so well written or if it’s negative because we are dealing with these issues almost 50 years later without much progress. Either way, taking some time to watch the show will be time well spent.