Today we get to meet Sam Drucker, the jack of all trades in Hooterville. 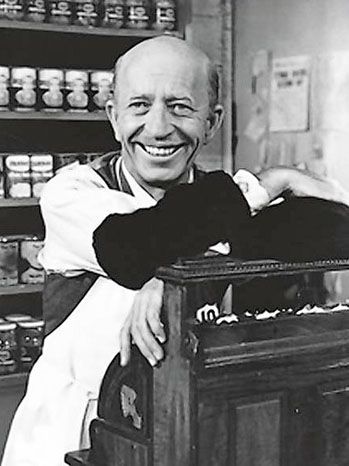 Frank Cady began his career in radio. He then moved on to stage and film. Frank would appear in 53 films during his life, including Young Man with a Horn, Father of the Bride, and Rear Window. In the mid-1950s, he started appearing in television series. He showed up in many shows for the next decade, including 78 episodes of The Adventures of Ozzie and Harriet as Doc Williams.

In 1963, he accepted the role that would make him a household name, Sam Drucker. From 1963-1971 he would appear as Drucker in three separate sitcoms: Petticoat Junction, The Beverly Hillbillies, and Green Acres, 320 episodes in all.

Sam is the heart, and brains, of the Hooterville society. He owns Drucker’s General Store. All the townspeople gather at the store to share gossip, read the news, pick up their mail, and buy their necessities. He gets some weird requests. How about nail polish that doubles as a bathtub sealant? Sam gives credit because he’s a nice guy and dislikes reminding his regulars that they are accumulating a large tab. Joe Carson can be seen playing checkers with some of the local men from time to time. We know Joe is probably hiding out from Kate, so she doesn’t put him to work. Charley and Floyd would never consider making a Cannonball run without a stop at Drucker’s store.

Sam is part of the group, but he is not only intelligent but wise. He understands the Hooterville folks, but he also understands how sophisticated people view Hooterville folks. Sam is content to live there, making a modest living. He sleeps in the back room of the store. In a review in the New York Times, Sam was described as “a bit of a straight man to the colorfully zany folk of Hooterville.”

Sam is a busy guy: he’s the postmaster; the constable, the Justice of the Peace; the Superintendent of Schools; the editor and publisher of the World Guardian, the town’s weekly newspaper; the town water commissioner; owns a “bank,” which is a cashbox under the counter; a fireman in the volunteer fire department; and conducts music while playing drums in the Hooterville band.  Where else would Hooterville residents vote than at Drucker’s store? When Sam switches from grocer to postman, he dons his official postal worker’s hat. Sam claimed to fish and camp in his free time, but I have no idea when he might have had any free time. No wonder the guy never got married. 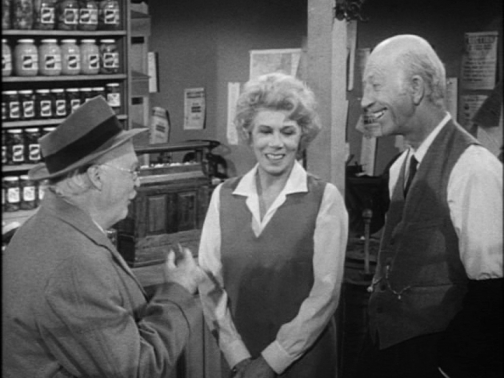 It’s no secret to us that he and Kate Bradley are in love with each other. They have a very strong and special friendship. We know they are just waiting for the girls to grow up before they marry and enjoy the rest of their life together. 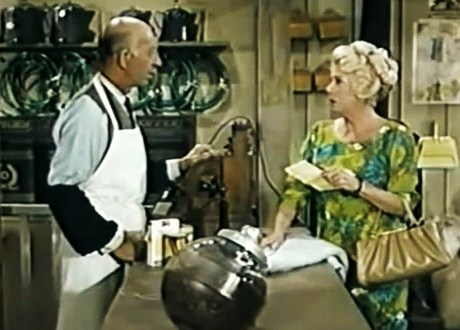 When asked about the secret to playing Sam Drucker, Cady replied that he just played himself. Like many of the stars I’ve profiled in my blog, Frank understood the advantages and disadvantages of playing Sam Drucker. He explained it this way: “You get typecast. I’m remembered for those shows and not some pretty good acting jobs I did other times. I suppose I ought to be grateful for that, because otherwise I wouldn’t be remembered at all. I’ve got to be one of the luckiest guys in the world.”

Though Frank retired in 1977, he did come out of retirement to film Return to Green Acres in 1990. In discussing the movie on the CBS News, Frank defended Green Acres. He said, “The only thing I resent is people calling it a corny show. It’s highly sophisticated, and it’s timeless, as I think all the reruns are establishing. 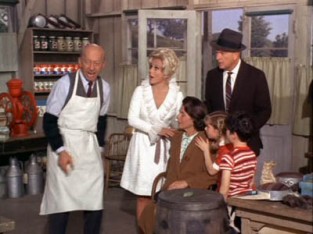 Sam Drucker is an all-around good guy. Who wouldn’t want to spend some time hanging out in his store. He can discuss politics with Oliver Douglas, how to treat cows with Fred Ziffel, or the latest fashions with the Bradley girls. In one article he was criticized for being smart, yet not finding it odd that Arnold Ziffel was a pig he talked to. I don’t think that’s surprising; if you watch most of the episodes, you realize that Sam and Arnold are probably the smartest guys in Hooterville. That is not a negative reference to most of the population; it’s a compliment to Arnold and Sam. 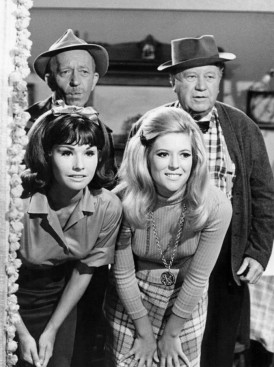 I did not enjoy The Beverly Hillbillies. I did like Petticoat Junction a lot, but I think Green Acres was one of the best-written shows on television. I never get tired of watching the reruns because I find something new in them every time. Like Sam, they appear simple at first look, but have great depth when you spend time in Hooterville. Sam Drucker, it’s a pleasure to know you.

4 thoughts on “Meet Sam Drucker: The Heart of Hooterville”