Happy Monday.  It’s “Won’t You Be My Neighbor” Day. They say fences make the best neighbors, but sitcom television proves otherwise.  In honor of the day, I decided to compose my list of the top ten sitcom neighbors.

10. Wilson from Home Improvement.  We don’t see much of Wilson, literally, but we hear him talking behind the fence.  Wilson W. Wilson, played by Earl Hindman, can solve any problem Tim has. Wilson spouts a lot of philosophical advice for Tim.  He has a Ph.D. in Cultural Studies, and has traveled the world studying extinct languages and forgotten cultures.  Much of his wisdom comes from these not-well-known societies. Wilson’s face was never revealed in full; it was always covered by something, most often the fence between the homes.  He calls Tim “Neighbor” and his wife Jill “Neighborette”. One of his pieces of advice is “If you place a small value on yourself, rest assured the world will not raise your price.” 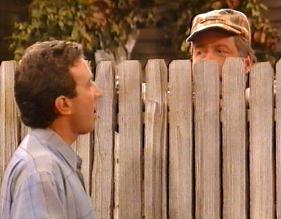 9. Charlie from Empty Nest.  We all worry about having a neighbor like Charlie.  Empty Nest was about a pediatrician, Dr. Weston, whose wife has died and  his two daughters (Barbara and Carol) move back in with him.  Charlie, played by David Leisure, is their next-door neighbor.  He is  lazy and has no respect for women. He often barges in to borrow food. He is a kind of son to Dr. Weston, but he and Carol have a love-hate relationship.  In one episode they get together, and try to make the relationship work, but both are relieved when they realize it never will, and they can go back to bickering. Charlie really does consider the Westons his family, and there are times he shows how much he cares about them; unfortunately, it never takes long for him to go back into annoying mode.

8. Marcus from About a Boy.  If Mr. Wilson had met Marcus, he wouldn’t have complained about Dennis.  Will Freeman (David Walton) is a single man who enjoys the single life.  He’s quite wealthy because he wrote a huge best-selling song.  Then Marcus (Benjamin Stockman) moves in next door.  Marcus wants to be best friends; he lives with his mom and rarely sees his dad. Will thinks being his friend will cramp his style until he realizes girls rate single dads favorably. Of course, after a short amount of time, Will does become Marcus’ best friend and father figure, even though Marcus can make life difficult for him at the worst times.

7. Chuck Larrabee from Last Man Standing.  Mike and Chuck spend a lot of time trying to come up with put downs for each other, but we know it’s only because as friends, they spend more time lifting each other up. Jonathan Adams plays Chuck, a retired Marine who runs a private security business and later works full time heading security at Outdoor Man, the store Mike co-owns. Although they joke around most of the time, occasionally, they get serious and have some in-depth, soul-revealing discussions.

6. Rhoda from The Mary Tyler Moore Show.  Rhoda knew instinctively how to bring out the best in Mary and encourage her to experience life more fully. Valerie Harper plays Rhoda Morgenstern who lives above Mary Richards in the Mary Tyler Moore Show. She becomes Mary’s best friend.  She has little self-esteem, and often makes fun of herself.  She is single and often tells Mary about her bad date stories.  After the fourth season, she moves to New York where she marries and gets her own series, Rhoda. Harper won four Emmys for her portrayal of Rhoda, three for the Mary Tyler Moore Show and one for Rhoda.

5. Yosemite Sam from The New Looney Tunes. Only Bugs could handle a neighbor like Yosemite Sam. Yosemite has a quick temper, doesn’t like anyone, and insults all his neighbors.  In the New Loony Tunes, Bugs and Daffy are roommates. Porky Pig is one of their good friends.  Sometimes Bug’s girlfriend Lola or Daffy’s girlfriend Tina are part of the plot.  Yosemite admits he is a cheat, a thief, and a liar.  He has a lot of terrific one-liners.

4. Kramer from Seinfeld.  Who wouldn’t want a wacky neighbor like Kramer to keep life more interesting. Kramer (Michael Richards) is eccentric, but kind-hearted and tries to help others.  Kramer is honest to the point of being rude at times. Kramer has the ability to talk Jerry into making choices against his better judgment.  Jerry forgives his quirks and views him almost like a brother. Most of the time, Jerry is highly entertained by the antics that Kramer gets involved with. 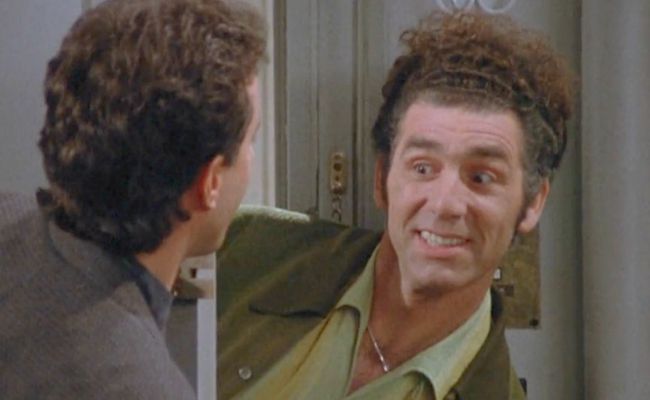 3. Gladys and Abner Kravitz from Bewitched.  The residents of Morning Glory Lane might not have a lot of privacy, but no criminal could get away with anything with Gladys Kravitz on the watch. Gladys is convinced that something strange is going on at the Stephens.  However, her husband Abner is never around at the right moment to back her up. She gets frustrated because she can never prove anything is out of the ordinary. Gladys was played by Alice Pearce and Abner was played by George Tobias.

2. Blanche Morton from Burns and Allen. No matter what else is happening, Gracie and Blanche (Bea Benaderet) are never too busy to stop and have coffee together.  They are able to discuss everything and accept each other with all their strengths and weaknesses. Blanche truly loved Gracie and accepted her with all her quirks.  Gracie livened up Blanche’s life. Blanche’s husband Harry thinks Gracie is ridiculous, so Blanche loves her all the more.

1. Howard Borden from The Bob Newhart Show. My favorite sitcom neighbor has to be Howard Borden.  Howard (Bill Daily) definitely gives Bob and Emily a purpose in life.  He takes as much work as any child, and eventually becomes family when he marries Ellen, Bob’s sister.  Howard is often at their apartment mooching their food or borrowing something again, but we know they wouldn’t have it any other way.  On one episode, Bob and Emily are going on vacation for ten days.  Howard is beside himself. They introduce Howard to a psychologist and when they come home, Howard is responsible and competent, but boring.  When they try to talk to him, they realize he is a carbon copy of the therapist. Bob and Emily bribe him with his favorite foods and, eventually he is borrowing items, being forgetful, and coming over to eat. They are relieved to have the old Howard back.

There are a lot of interesting neighbors in TV Land.  Make a list of your favorite.

2 thoughts on “Won’t You Be My Neighbor?”