Happy Halloween! It doesn’t seem right to discuss Halloween episodes without considering the series that made witches fun—Bewitched. During its eight years from 1964-1972, Bewitched produced five Halloween episodes.  Let’s discuss each of these shows in more depth. 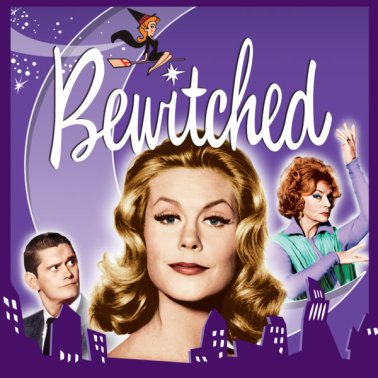 The show opens with Samantha (Elizabeth Montgomery) and three of her aunts, including Clara (Marion Lorne), in her living room complaining about humans’ tendency to portray witches as ugly old crones. Endora, (Agnes Morehead) absent, is apparently in France where she is said to spend every Halloween avoiding the holiday. Darrin (Dick York) is designing a campaign for a company that makes Halloween candy.  The client, Brinkman, wants a stereotyped ugly witch for his logo.  When Sam sees the sketches for the new campaign, she and Darrin have a fight. He designs a beautiful witch instead, and when the client does not like it the next day, and Darrin refuses to design a logo with an ugly witch, Larry (David White) fires him. Feeling bad about Darrin losing his job, the aunts and Samantha pay a visit to Brinkman while he is sleeping.  They turn his phone into a snake, “twitch” him to a spot where he is ready to be shot by the Foreign Legion, and finally turn him into an old witch before he begs forgiveness and agrees to show them in a favorable light. The next day he has Darrin rehired and uses the beautiful witch. Things turn out great for everyone because it turns out fathers buy most of the Halloween candy, and they like the beautiful witch so sales skyrocket.

This was my favorite Halloween episode. Endora (Agnes Moorhead) wakes Sam up to tell her to be ready to go to the “sacred volcano” in four hours for Halloween.  Sam refuses because they are having the Tates and a client and his wife for dinner. While they are talking later, Sam gets a box of ugly witch decorations delivered.  Endora is furious thinking that it came from Darrin; actually it was sent by Larry and made by the client’s company. Endora goes to visit Darrin at work. He tells Endora he will not encourage Sam to go the volcano.  Later that night as they are waiting for their company to arrive, Endora turns herself into a little girl in a gypsy costume, played by an adorable Maureen McCormick. When Darrin opens the door to give her candy, she tricks him and turns him into a werewolf.  Sam immediately retrieves her mother as the little girl, and Endora pretends to forget the spell.  Sam makes her sit in the den to think about it.  As they are entertaining their guests, Darrin is in and out of the room, cutting his long nails when they grow, and running upstairs to shave his face and hands.  When he becomes a full-blown werewolf, he goes outside to hide and runs into Larry and the client.  The client loves the “costume”.  When Darrin goes upstairs to “change,” Sam tells her mother that she is behaving just like the stereotype witch humans portray them as and to the one person who believes in them.  Endora changes Darrin back to himself, turns back into herself, and stays for dinner.

Fun Fact:  Maureen McCormick also appeared on I Dream of Jeannie and My Three Sons before becoming a regular on The Brady Bunch.

Endora creates a house across the street from Sam and Darrin so she can hold a Halloween party there. Darrin forbids it, so she changes the party to Sam and Darrin’s house. Uncle Arthur (Paul Lynde) arrives early and has most of the funniest lines in the show. Mrs. Kravitz (Alice Pearce) goes to spy on the house for Halloween, and Uncle Arthur twitches her back to her own front door.  When she turns around, she sees a man arriving at the Stevens’ home with a cat which he changes to a beautiful woman.  She calls the city councilman running for re-election to tell him there is something fishy in the neighborhood he needs to deal with.  The rest of the show occurs at the party.  When the councilman and his manager come to the door, Uncle Arthur has them walk through it only to be in the backyard.  This happens several times and then they try a window and the same thing happens so they can’t get to the party.  During their predicament, the cat/woman decides she likes Darrin and curls up at her feet and asks him to scratch behind her ears; he of course has no idea she’s a cat.  The councilman finally gives up and goes home.  The girlfriend is turned back into a cat at midnight.  At that point, Endora recites her “The Night Before Halloween,” but Arthur keeps interrupting with funny lines, and she gets so annoyed she puts him in the middle of a fountain and takes her guests to the Riviera.  One of the best moments in this show is when Sam waves and says “Hi Willie,” and we see Willie Mays across the room.  Darrin, surprised and speechless, finally asks if that is indeed Willie Mays.  Sam says of course, and Darrin asks if he is “you know”, and Sam says “with a career as amazing as his, could he be anything else.” 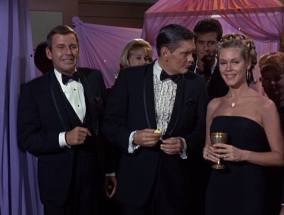 Fun Fact: Mr. and Mrs. Kravitz, played by Alice Pearce and George Tobias, played Mr. and Mrs. Fenimore  in the Doris Day movie, The Glass-Bottom Boat in 1966.  Paul Lynde was also in the movie. The Kravitz house on Bewitched later became the house for The Partridge Family.

Samantha reads Tabitha a Halloween story before bed.  The Stevens have decided to raise Tabitha as a human with the same traditions and books other children her age have. When Sam leaves the room, thinking her asleep, Tabitha brings three of the book characters (an elf, a goblin, and a jack o’lantern) to life. Once again, Samantha refers to Endora being in France where she spends every Halloween. Samantha makes Tabitha a leopard costume.  Across the street, Gladys Kravitz (now played by Sandra Gould because Alice Pearce died from cancer) is fixing her nephew’s costume, a jack o’lantern that is identical to the character from Tabitha’s book.  She explains to him why they are not going to the Stevens’ home for candy. While Sam and Tabitha go trick or treating, the three book characters catch up to them.  Thinking they are friends of Tabitha’s, Sam invites them along.  At the first house, the woman handing out candy suddenly has a beard.  Sam reprimands Tabitha, thinking she used her powers to do that. At the next house, someone freezes the man handing out candy and the elf grabs a bunch more.  Now Sam is really mad and tells Tabitha she has to go home and right to bed. When they get home, Sam sees the open book with the characters missing and puts two and two together.  She goes back to look for the characters.  In the meantime, Gladys’s nephew who runs away from her sees the three characters, and they decide to play a joke by sending the other jack o’lantern back with Gladys.  Sam arrives shortly after and makes all three characters go home with her. In the meantime, the jack o’lantern with Gladys throws a pie at a woman handing out dessert and Gladys takes him home.  When they get home and she can’t remove his head, she gets worried.  When he gets a chance he runs off. In the meantime, Sam realizes she has Gladys’s nephew. When she goes to look for the real jack o’lantern, the elf turns the nephew into a goat.  Just in time, Sam gets home, has Tabitha put the three characters back in the book and then turns the goat back into a boy just as Gladys comes looking for him. Luckily, he can’t remember the evening at all. 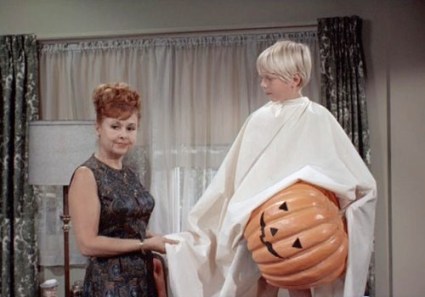 Fun Fact: Although we never hear them, the Bewitched theme song had lyrics.  Singer Steve Lawrence recorded a version of the song and lyrics.

The show opens with Sam making final fittings to Tabitha’s princess costume.  Endora pops in and gets mad when she sees witches’ costumes.  Sam tells her she is heading up UNICEF in the neighborhood. Endora and Darrin get into an argument about trick or treating.  Neither will give in and Darrin (now played by Dick Sargent) insults Endora.  When he gets the office, he realizes that he is slowly becoming a witch.  He heads home and apologizes, so Endora returns him to normal, but then he insults her again and she turns him back into a witch. Sam agrees not to trick or treat for UNICEF if Endora fixes Darrin.  In the meantime, Larry is upset because their client’s wife is head of UNICEF and is mad Sam quit.  Darrin tells Sam she can’t fight his battles.  After Sam and Tabitha leave to trick or treat, he takes the UNICEF kids out.  Sam and Tabitha see him and help out.  While they are at the school UNICEF party, the client and his wife think Darrin looks so good as a witch, they want that for their new trademark.  They make lotion and the witch is the “before” look. When they get home, Sam tells Endora that she’s given the stereotype witch more publicity than most people. Endora restores Darrin to normal, and Darrin introduces Sam, the “beautiful” witch to the client who likes the idea and uses the good witch as the “after” photo for their lotion. This was the weakest episode of the bunch.  Apparently, the writers could not come up with a new idea because they did an almost identical writing of the first Halloween episode.

Sad Fact:  Dick York had a seizure on the set on season five.  He had excruciating back pain from an injury he sustained making a movie in the 1950s.  He stepped down from the show, never received royalties from reruns, and died on welfare. When Dick Sargent replaced him, the show never referred to Uncle Arthur, Aunt Clara, or the Kravitzes again.

The first four Halloween Bewitched episodes are treats and well worth watching.  The last episode is a trick, and like the series itself the last three years, is tired and lacking interest.  Skip that show and watch The Glass-Bottom Boat instead. If you’re looking for an unusual theme party, play the episodes that feature Uncle Arthur and use the best one-liners as part of your menu and decorations.

See you in November.