When Thanksgiving episodes are being considered, Friends has to top the list.  Every year for a decade, the crew got together for the fall holiday. Watching these ten episodes provides a fun overview of what was happening in the show during its entire run. Let’s face it, with a decade of holiday shows to write, not everyone can be velvety pumpkin pie with real whipped cream.  I’d say a few were turkeys, but who doesn’t think turkey is the best at Thanksgiving, so instead let’s say a couple of them rank up there with Aunt Harriet’s fruit cake. Let’s take a look at the Thanksgiving treats.

Season 1: The One When Underdog Gets Away

Monica and Ross’s parents are in Puerto Rico, so Monica decides to cook for Ross and invites Phoebe and Chandler. The friends chipped in to pay for Rachel’s ticket to Vail so she could spend the holiday with her family. Joey posed for a free clinic ad which painted him as the face of venereal disease, so his family asked him to bypass Thanksgiving this year and ends up at Monica’s as well. Ross leaves for his ex-wife’s saying he will be back for dinner. Before Rachel leaves, they head up to the roof to see the Underdog float that got away from the Macy’s parade and get locked out of the apartment. By the time they get in, Rachel has missed her flight and the dinner is ruined.

After Ross kissed Rachel, he has to decide between dating her and Julie. He makes a pro/con list to help him choose, but Rachel sees it on his computer. She locks him out of the apartment.  He desperately tries to see her and tell her all the pros he has for her, but the episode ends with both of them looking out their apartment window alone. While this was a Thanksgiving episode, there is very little holiday cheer written into the script.

Season 3: The One with the Football

All the friends are having a holiday dinner and decide to play a football game. Monica and Ross tell how competitive they were at football as kids; in fact, their mom banned football from Thanksgiving. Now that they’re adults they are ready to try it again. Rachel scores the winning touchdown but misses touching the end zone, so Monica and Ross both go for the ball.  Neither one of them will let go until dark when they finally declare it a tie. One of Joey’s best lines in the series “There must be a special place in heaven for people that hung out with you two in high school.” 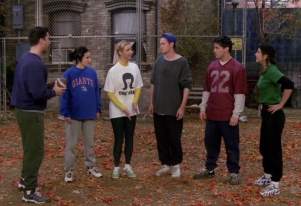 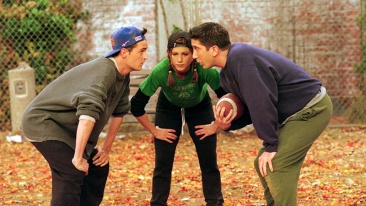 Season 4: The One with Chandler in a Box

Joey refuses to talk to Chandler who kissed his girlfriend. Monica gets ice in her eye preparing the meal but doesn’t want to go to the eye doctor because it’s her ex-boyfriend Richard.  Finally, Phoebe calls to make an appointment anyway and finds out Richard is out of town. Monica is treated by his son. Monica flirts with him and invites him to dinner.  He reminds her of Richard, and she reminds him of his mother, so their relationship is over before it begins.  The friends have a traditional holiday watching football, talking about the past, and drawing Secret Santa names. Eventually Kathy breaks up with Chandler and Joey makes him run off after her. 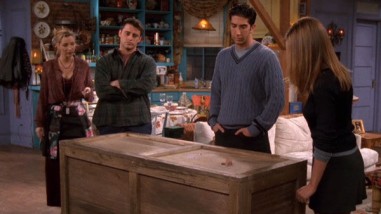 Season 5: The One with All the Thanksgivings

After eating a big meal where they talked about what they were thankful for, the friends reminisce about the worst Thanksgivings they remember. Ross talks about his marital situation, Phoebe remembers being in the Revolutionary War in a prior life, Chandler talks about his parents’ divorce, Joey describes a holiday before they all knew each other when he stuck his head in the turkey to scare Chandler and got it stuck. Monica says when she met Chandler he told Ross she was fat. The next year, he drools over a slim Monica and to get even she pretends to lure him so he will undress and be left alone.  However, she accidently drops a knife on his foot and he loses part of his toe. When he hears the story he is furious but then Monica puts the turkey on her head and dances around.  Not only does he lose his anger, but he tells her he loves her. 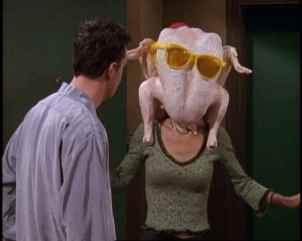 Season 6: The One Where Ross Got High

Monica and Ross’s parents are coming for Thanksgiving. Chandler is trying to impress them since he and Monica are engaged, but they don’t seem to like him. It turns out one weekend when Ross was home from college, they caught him getting high in his room and he blamed it on Chandler. Monica tells Ross he has to come clean. He doesn’t so she begins airing his dirty laundry. He in turn says Monica and Chandler have been living together and she retaliates that he and Rachel have been married and divorced. The Gellars leave liking Chandler better than their own children. 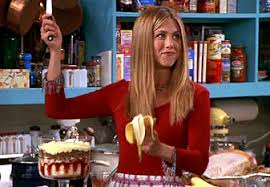 Phoebe is dog-sitting. Chandler doesn’t want to admit he hates dogs so he pretends to be allergic. The girls take the dog to Ross’s apartment but later sneak him back in. Rachel’s coworker Tag joins the group because his girlfriend broke up with him. He and Rachel realize they have feelings for each other. 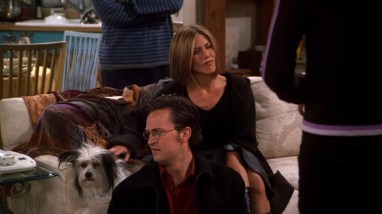 Season 8:  The One with the Rumor

Ross’s old friend Will comes for Thanksgiving. He lost 150 pounds since high school. He reveals that he and Ross had an “I Hate Rachel Green” Club because she was so mean in high school. Rachel is mad but especially at Ross because she declares that she never did anything mean to him till Monica reminds her she told everyone in school that Ross made out with the school librarian. Joey turns Phoebe’s old maternity pants into his new Thanksgiving pants. 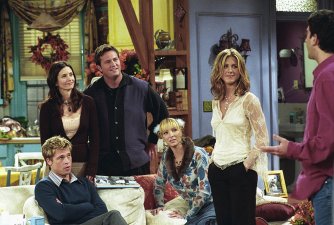 Season 9: The One with Rachel’s Sister

Rachel’s older sister comes for the meal. She manages to offend everyone, and no one likes her. Joey remembers he was supposed to be in the Macy’s parade with his Days of Our Lives cast members but it’s now over. The other running gag is Monica wants everyone to be especially careful with their new wedding china, and Joey is given an old plate because they can’t trust him. Not one of the better episodes.

Season 10: The One with the Late Thanksgiving

Monica decides she needs a break from hosting Thanksgivings. Phoebe talks her into competing with her prior meals and she talks Rachel into entering Emma into a baby beauty pageant. Ross and Joey are almost an hour late because they were at a Rangers hockey game.  When Monica overhears the excuses they are thinking of using she locks them out of the apartment.  Eventually she lets them in. After the meal, Chandler and Monica get a call that a birth mother is considering them as a candidate to adopt her baby. 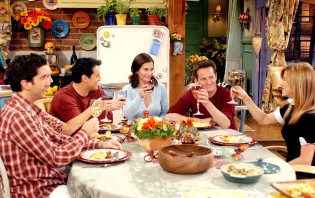 As you reviewed these episodes, I hope you remembered your favorites or were intrigued by several you want to watch.  Pick one for an appetizer, one for the main entrée and your favorite for the pumpkin pie this Thanksgiving weekend. When you consider everything you are thankful for this holiday, remember creative writing and amazing casts because they really don’t all come together very often.