This show was based on several stories by Thorne Smith and a movie starring Cary Grant, Constance Bennett, and Roland Young from 1937. When Cosmo Topper (Leo G. Carroll) and his wife Henrietta (Lee Patrick) move into their house, Topper becomes aware of three more residents, George and Marian Kerby (real husband and wife Robert Sterling and Anne Jeffries) and a St. Bernard named Neil who tried to save them in a skiing accident during an avalanche. One of the ongoing jokes in the show is that Neil is always drinking alcohol left around the house after getting hooked on the brandy he carried around his neck. The complication is that they are all ghosts, and only Topper can see and hear them.

Most of the humor comes from their interaction with other people like salesmen or society snobs. Scripts were full of word play and clever dialogue. They would intervene in activities Topper was involved with like his weekly bridge game.  Once he wrote a check for $5 which they changed to $5000. Topper was a bit cheap even though he was VP of the National Security Bank. The ghosts were full of mischief, and we liked them for their fun “spirit.” Being dead, they were fearless.

One of the typical plots happened when Henrietta was in the hospital.  Marion wants to celebrate her birthday with their old friends.  She sends invitations to them from Topper. Topper has no idea people are coming.  The women all make a fuss over him being alone with his wife in the hospital and the party is a bit wild compared to the ones Topper and Henrietta usually host. Of course, Henrietta gets out of the hospital early and arrives with the party in full swing.

Wires, ectoplasm, and the stopping and starting of cameras were used to bring the ghosts to life.

One fact I found surprising was that eleven of the first year’s episodes were written by composer Stephen Sondheim and George Oppenheimer. 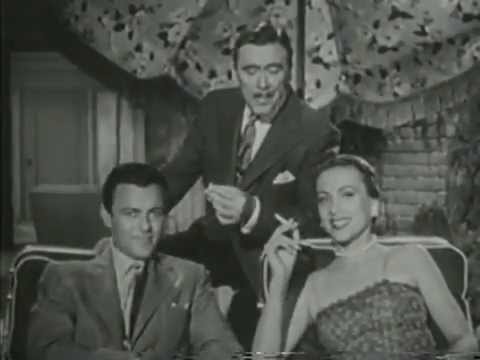 The show began in 1953 with R.J. Reynolds as the sponsor for its Camel cigarettes. The cast was required to smoke in every episode.  In 1955 it was picked up by Standard Brands and moved to ABC.  The next year General Foods sponsored it on NBC where it was cancelled in 1957 after a total of 78 episodes. The show hasn’t aged well because the special effects seem unsophisticated and obvious today. Even so, I would list this as a treat.

Carolyn Muir (Hope Lange), a widow, decides to move to Schooner Bay where she can focus on her writing career and raising her family, which consists of Jonathan (Harlen Carraher), Candy (Kellie Flanagan), and a dog Scruffy. She rents the house from Claymore Gregg (Charles Nelson Reilly). The house, Gull Cottage, functioned as another character in the show.  Below on the left is how it appeared in the show; on the right is the show today. The house was actually in Santa Barbara, California nowhere near the water.  We also get to know Noorie Coolidge (Dabbs Greer) who owns the local lobster restaurant. 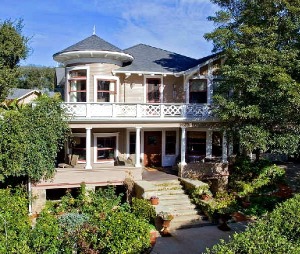 Carolyn plans to bring in a housekeeper Martha (Reta Shaw), but she doesn’t plan on another household guest, Captain Gregg (Edward Mulhare) (Claymore’s uncle), who lived in the house in the 1800s. Captain Gregg falls in love with Carolyn; he also develops a special relationship with the kids.

The show was based on a book by R.A. Dick from 1945 and a movie starring Gene Tierney and Rex Harrison from 1947. The special effects were impressive for the 1960s. When Gregg and came and went, the actors all had to freeze.  Strings and wires were everywhere to help with the other magic parts of the film.

In an interview with Flanagan about her time on the show, she said every show took a week to produce.  She enjoyed her experiences with the series saying that the cast had great actors, “Hope Lange was extremely sweet and kind; Reta was a delight, and Charles Nelson Reilly was hilarious” and it was a happy set to work on.

The show debuted on NBC where it played the first year. The critics liked it, and Hope Lange received two Emmys for lead actress in a comedy. However, the first year it was up against My Three Sons and Lawrence Welk. The show moved to ABC for a second season but lost its ratings battle to Family Affair. Definitely a treat.

Basically, this was a slap-stick comedy reprising the roles of Corporal Agarn and Sergeant O’Rourke from F-Troop as paranormal detectives.  Larry Storch is Eddie Spencer, Forest Tucker is Kong, and Bob Burns is their assistant and chauffeur Tracy, who just happens to be a gorilla. The team battles ghosts of legendary fiends like Frankenstein’s Monster, Dracula, The Mummy, and The Werewolf. 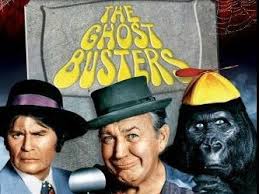 An unseen boss, Zero, would give them their assignment and then the tape would explode.  Their headquarters was a run-down office and they had to use a pay phone nearby. Every week they were taken to the same castle to defeat a new foe. They always used their Dematerializer to send the specters back to the “great beyond.” Somehow, they convinced Jim Backus to guest star in one of the episodes.

Burns was hired because the producers decided it would be cheaper to hire an actor who already had a gorilla suit. Burns is best known for Bob’s Basement, where he displays his Hollywood science fiction and horror collectibles.  Seen on Saturday mornings, the show produced by Filmation only lasted for 15 episodes.   Definitely a trick.

The premise of this show is that famous actress Jennifer Farrell (Ann Jillian) was chasing down an ice cream truck in 1963 when it backed up and accidentally ran her over. George Elliot (Brandon Maggart) was the lawyer who handled her affairs after she died.  He decided to buy her home for his wife (Georgia Engel). 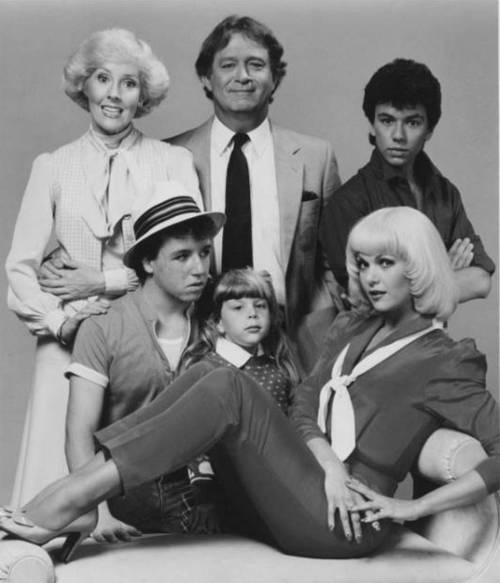 What the parents don’t realize is that Jennifer still lives here, and only their son Joey (John Navin Jr.) can see and communicate with her. The show was sexy because Jennifer was a Marilyn Monroe type and silly because she acted like a second mother to Joey. The series was told mainly from a 13-year-old’s point of view. 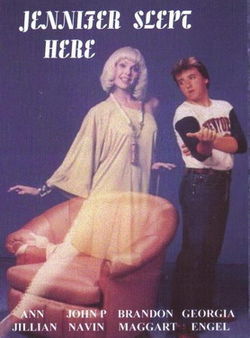 The show had decent ratings but went up against The Dukes of Hazard and Webster, so it was cancelled after 13 episodes, one for each year of Joey’s life. I’d classify this one as a trick.

When the Dooleys (Stuart Pankin and Wendy Schaal) purchase a new home, Grant and Claire Pritchard (Eric Idle and Caroline McWilliams) area already living there since they had been the previous owners. However, they are no longer alive. With a bit of a different twist, only Grandpa (Henderson Forsythe) can see and hear them. The Dooleys have a son Derek (Jay Lambert), and the ghosts would try to help him with problems like bullies to repay the Dooleys for giving them a place to live, even though they didn’t know they were doing so. 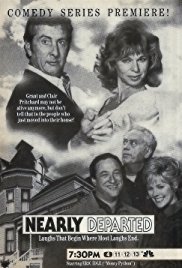 The critics were all over the place on this one. Joan Hanauer, a UPI feature writer, wrote “Nearly Departed is a fast, pleasant sitcom, and the Pritchards make you believe one thing you can take with you is your sense of humor.” Howard Rosenberg from the LA Times, wrote “ ‘Nearly Departed’ is a zero. A mishmash of ‘Topper’ and ‘Beetlejuice,’ the NBC comedy is worse than bad in its premier at 8:30 . . . making such worthy comic actors as Monty Python’s Eric Idle and Stuart Pankin look worse than bad in the process.”

I guess most viewers agreed with Rosenberg because the show was gone after only six episodes.  I have to give this one a trick.

However, when they move into their new house, they find three ghosts who had taken up residence:  Ray Preston (Chico Benymon), a saxophone player, and his sons, well-mannered Miles (Curtis Harris) and rude and sarcastic Louie (Benjamin “Lil P-Nut” Flores Jr.). The two families learn to work together using ghostly powers and human intellect to solve problems together. This show lasted two seasons on Nickelodeon.  I would not call this a trick or a treat; it’s like the house that gives out apples, not bad but don’t go out of your way to check it out.

I would recommend picking up The Ghost and Mrs. Muir or Topper DVDs to watch as you give goodies to the little goblins ringing your doorbell.  Better yet, get the original movies.  It’s always a treat to watch Cary Grant and Rex Harrison. While you are sitting around a bonfire this month, you can also read the original books and decide which version you like best.  Happy Halloween.