Beginning in 1977, Eight is Enough was a hard show to categorize; not really a drama but not a comedy either, even though it featured a laugh track. The show was based on the 1975 autobiography of newspaper editor and columnist Thomas Braden. Tom Bradford (Dick Van Patten) was a columnist for a Sacramento, California newspaper. He and his wife Joan (Diana Hyland) have eight children:  Mary (Lanie O’Grady), David (Mark Hamil), Joanie (Laurie Walters), Nancy (Kimberly Beck), Elizabeth (Connie Needham), Susan (Susan Richardson), Tommy (Chris English), and Nicholas (Adam Rich).

A few changes were made from the pilot episode. ABC questioned the performances of the actors who played Nancy and Tommy and replaced them with Dianne Kay and Willie Aames.  Another change from the pilot occurred in the role of David. Originally, Mark Hamil was signed but after he received the offer to appear in an upcoming movie Star Wars, he received permission to break his contract and the role was taken over by Grant Goodeve.

When the show began, David lives on his own.  Mary is going to school to be a doctor while Joanie, Susan, and Nancy are late studying acting, fashion, and modeling. Elizabeth and Tommy are in high school, and Nicholas is still in elementary school. Tommy would later be part of a rock ‘n roll band.

Four episodes into the series, Diana Hyland who played Joan, the mother, was diagnosed with breast cancer and died soon after. For the rest of Season 1, she was said to be away. In Season 2, Tom was portrayed as a widower and later in the year he meets and marries Abby, played by Betty Buckley. Abby is a school teacher. The series deals with the trials and tribulations every family tackles, including school concerns, sibling rivalry, and relationship issues. The kids were quite different in personality, and it seems like everyone could relate to at least one of them. While The Brady Bunch sometimes seemed a bit syrupy, everyone wanted to be part of a family like the Bradfords.

The show captured the hearts of many viewers, being number one for a while. In the first season the show finished 23rd overall, but seasons 3-4 had the show 11th or 12th each year.

In Season 3, Susan marries Merle “The Pearl” Stockwell (Brian Patrick Clarke) who was a baseball star, and David marries Janet (Joan Prather) in a double ceremony. In the last season, Goodeve suggested he and Janet divorce because he didn’t think David was being featured in enough storylines. With so many of the kids flying the coop, Ralph Macchio was brought in as Abby’s orphaned nephew who lived with the Bradfords.  You always know when an orphaned relative is hired, the show is not going to last long.

The show was developed by writer William Blinn. The first three seasons were filmed at The Burbank Studios (now the Warner Brothers Ranch) and the last two years were filmed at MGM Studios in Culver City. Writers were often shared with The Waltons, which was another Lorimar-produced show. 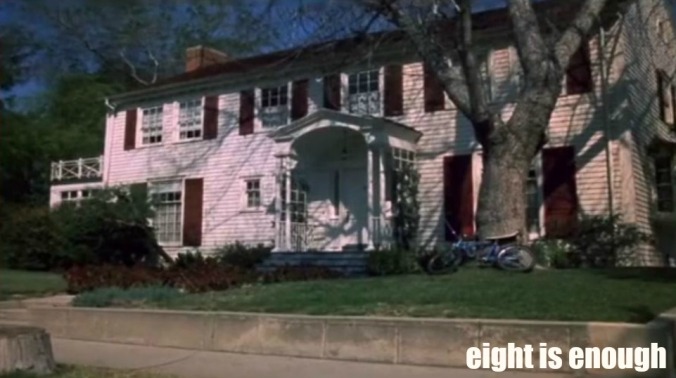 During the first couple of seasons, an instrumental version of the theme was played during the opening. However, in later seasons, lyrics were added, and the theme was sung by Grant Goodeve. Those lyrics are:

There’s a magic in the early morning, we’ve found,

When the sunrise smiles on everything around.

It’s a portrait of the happiness that we feel and always will,

For eight is enough to fill our lives with love.

Oh, we’re lucky we can share this beautiful stage.

So many find the world an empty place.

Anyone who asks to stand alone is always standing still,

And eight is enough to fill our lives with love.

And one that really shows.

Just look at every one of us —

See how it overflows!

Though we spend our days like bright and shiny new dimes,

If we’re ever puzzled by the changing times,

There’s a plate of homemade wishes on the kitchen window sill,

And eight is enough to fill our lives with love.

Yes, more than enough to fill our lives with lo-o-o-ove.

After five seasons, with production costs rising and ratings falling, the show was cancelled.  Their “sister” show The Waltons was also done. Later in a 2000 interview, Van Patten said that he learned about the cancellation in a newspaper story.

Two television movies aired in the 1980s. “An Eight Is Enough Reunion” was seen in 1987 when everyone came home to celebrate Tom’s 50th birthday, and “An Eight is Enough Wedding” aired in 1989. Mary Frann and Sandy Faison, respectively, played Abby in these movies. 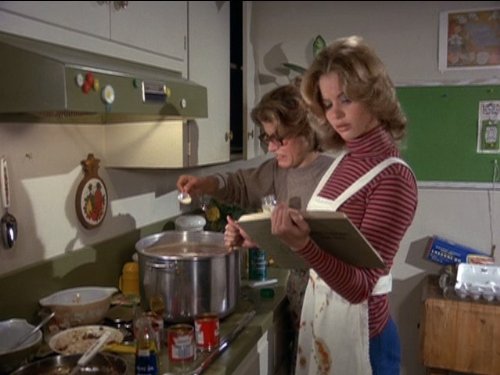 Unfortunately, the show is rarely seen in syndication. DVDs were released between 2012 and 2014.

Most of the articles I read portrayed the set as a fun place to work, due to the positive influence of Van Patten.  He stayed close to many of the actors and actresses and truly viewed them as family. It was a critically acclaimed show, nominated for several Emmys. While clothing styles may have changed, family issues haven’t. The Bradford family handled their problems together in a realistic manner. It would be a fun show to binge watch this winter.