The title is the only reference I’ll be making to that 1980s show.  In honor of our 29th anniversary today, I thought I would look at sitcoms dealing primarily with marriage.  Surprisingly, there have not been as many as one would think.  It’s amazing how many sitcoms are about single parents, families, friends, or co-workers.  If there are any similarities between our married life and Al and Peg Bundy’s life, I really don’t want to know about them.  So, let’s look at a few sitcoms that did focus on blessed unions.

The George Burns and Gracie Allen Show – George Burns and Gracie Allen filmed 120 episodes for their television series.  They were married in real life, and the set design for the show was based on their real-life home. Gracie was zany, but her literal perspective of the way life worked made uncanny sense.  George loved Gracie and knew that she was the center of his marriage and career. George was very generous and made numerous gifts to Cedars-Sinai Medical Center which is at the intersection of George Burns Road and Gracie Allen Drive. I love looking at marriage that way – it’s an intersection found at the center of a very diverse couple.

I Love Lucy – In 1953, I Love Lucy joined the Monday night line-up with The George Burns and Gracie Allen Show. Lucy and Ricky (Lucille Ball and Desi Arnaz) are probably the most famous married couple. For six years, they took ordinary situations and exaggerated them. Lucy’s hare-brained schemes created an endless source of comedy. However, the problems with couple faced were believable, and they were the same problems other young couples were facing the first couple years of marriage like how to pay the rent, buying a new dress, and dealing with in-laws.

Pete and Gladys – Starring Harry Morgan and Cara Williams, this was one of, if not the first, spinoff.  Pete Porter was a neighbor featured on December Bride for six years.  When the show went off the air, we finally met Gladys, his wife.  He was an affectionate and caring husband and she was a very nice homemaker.  Unfortunately, the show only lasted two seasons, although Harry Morgan went on to star in many television shows.

The Dick Van Dyke Show – Dick and Laura Petrie (Dick Van Dyke and Mary Tyler Moore) showed us an intimate side of married life for five years.  They were funny and had an interesting life.  Sometimes they even watched a bit of television at night.  They were a couple who admitted they were a bit insecure about parenting.  They worked through their problems with humor and logic. Although Dick was a writer and Laura a stay-at-home mom, they were equal intellectuals and that was the basis of their relationship.

The Bob Newhart Show – Bob and Emily Hartley (Bob Newhart and Suzanne Pleshette) were another couple who were intellectual equals.  They were funny, understanding, and warm.  They argued about real issues, and they made up.  Both the characters had very definite identities, and they did not always see eye to eye, but they respected each other and loved each other deeply.

Mork and Mindy – Mork and Mindy was a sitcom about an alien and the girl next door (Robin Williams and Pam Dawber). If most American couples think they have some impossible issues to work through, they should watch a few episodes of Mork and Mindy. The show lived on for four years, primarily because of Robin Williams’ wild improvisations and Pam Dawber’s believable love for Mork. Mork and Mindy was not only a spinoff from Happy Days, but it was actually inspired by a Dick Van Dyke Show episode “It May Look Like a Walnut.” Director Jerry Paris created the idea when Garry Marshall mentioned that his son would like to see a spaceman on television. Paris, who played Jerry Helper on the Dick Van Dyke Show, remembered that episode and invented Mork.  In season four, Mork laid an egg, in more ways than one, and the show was cancelled. 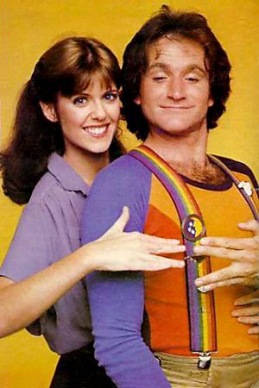 Dharma and Greg – When free spirit Dharma and lawyer Greg (Jenna Elfman and Thomas Gibson) get married on their first date, the show was born.  They have conflicting views on everything except how much they love each other.  These views lead to comical situations – imagine a Republican and Democrat married in today’s political climate! Dharma overshares all her views and feelings, while Greg was raised to not talk about such things.  I think a lot of us can relate to that.

Mad About You – Paul and Jamie Buchman (Paul Reiser and Helen Hunt) are newlyweds who cope with life as a recently married couple.  They point out the gentle humor of everyday life situations. One description of the show said that this show starts after a party when the husband and wife are alone in the car discussing the evening. For seven seasons, they tackled the issues so when the series was over, there was no “seven-year itch” to worry about.

A fun fact, Carl Reiner reprised his Alan Brady role from the Dick Van Dyke Show on Mad About You.  The episode made several references to the classic sitcom, including Jamie saying “Oh Paul,” an aside to Laura Petrie’s famous “Oh Rob.”

These were several of the couples we watched during our life who indirectly influenced the way we viewed marriage. Each of the couples has something to teach us about successful marriages. One review of Burns and Allen concluded that “the George Burns and Gracie Allen Show exuded excellence, with a unique format, interesting plots, a great cast, and virtually non-stop comedy featuring the unparalleled zany wit of Gracie.”  I would consider it a compliment if that was a review for our marriage as well.