Building on the popularity of The Flintstones, in 1962 ABC and Hanna-Barbera decided to debut another new animation show aimed at adults. Instead of the prehistoric past, this show would be set in the far-off future. It aired Sunday nights.  It was also the first show on ABC to air in color. It was The Jetsons. The Flintstones had been recorded in color, but the first two years it aired in black and white. However, it was up to the affiliates to decide if they wanted to broadcast both of these shows in color or black and white. Often they chose black and white because only 3% of the population had color televisions in 1962 which increased to 50% by 1972.

Hoyt Curtin created the theme song. This show featured the typical 1950s sitcom plots. It was adult oriented and used a laugh track.

The Jetsons live in Orbit City in the Skypad Apartments, high in the sky. George is a family man.  George is not Fred Flintstone.  However, he does get into many predicaments like Fred, and his boss fires him often.  George works for Spacely Space Sprockets, and his boss is Cosmo Spacely. Their competitor is Mr. Cogswell who runs Cogswell Cogs. Mr. Spacely is easily angered and hard to work for. He and George were childhood friends. George’s work computer was RUDI – Referential Universal Differential Indexer.  He has a human personality. George was voiced by George O’Hanlon. Mr. Spacely was voiced by Mel Blanc. 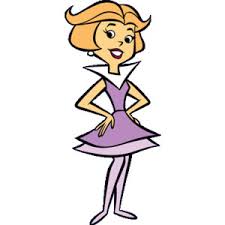 George is married to Jane, a homemaker like Wilma.  Jane is a member of the Galaxy Women’s Historical Society.  Her favorite store is Mooning Dales.  Penny Singleton, the original Blondie of the movies, plays Jane.

They have two children, Judy, a 16-year-old, who attends Orbit High School and Elroy, 6, who attends the Little Dipper School.  Judy likes clothes, boys, and her diary, much like teens in the 1960s.  Elroy is quiet, easy going, and highly intelligent, and he studies space history, astrophysics, and star geometry. Janet Waldo was the voice of Judy, while Daws Butler provided the voices of Elroy and Spencer Cogswell. 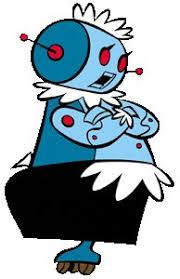 Rosie is their robot maid and Astro is their dog. Rosie is an outdated robot, but the family loves her. She performs all the housework and does some parenting of Elroy. Surprisingly, Rosie was only in 2 of the 24 episodes that aired in 1962. Astro precedes Scooby Doo but talks like him and looks very much like a gray Scooby. Jean Vander Pyl and Don Messick from The Flintstones take on the voices of Rosie and Astro.

Two other characters who make appearances are George’s eccentric grandfather, Montague Jetson voiced by Howard Morris.  Stella/Petunia Spacely, Cosmo’s wife, is overbearing and snobby and she was voiced by Jean Vander Pyl.

In 1963, Morey Amsterdam and Pat Carroll sued H-B for breach of contract.  Apparently, they were signed to a 24-episode contract to voice George and Jane.  They were guaranteed $500 per episode. According to the network, they had to be replaced because of sponsor conflicts with their other shows, The Dick Van Dyke Show and Make Room for Daddy. I believe the suit was dropped; however, I couldn’t find proof of that.

The show did not get very good ratings.  Part of the problem was that so many people were watching it in black and white. Another problem is that it was up against Car 54, Where Are You and, ironically, Walt Disney’s Wonderful World of Color. After the first year, the network moved it to Saturday morning. In 1985, 41 episodes were made and 10 additional shows were created in 1987. It’s hard to believe, but those of us who grew up in the 1960s and 1970s watched the same 24 episodes over and over since new ones weren’t made for 23 years after the debut.

Although it was only on the air in prime time for one year, marketing certainly did not suffer.  Many Jetson toys, games, and figures were sold. 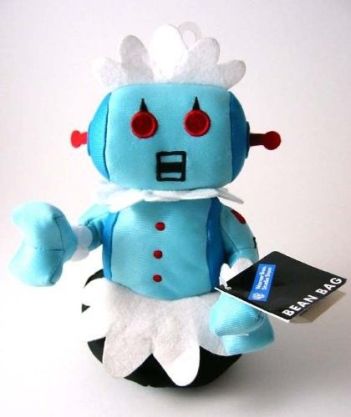 In addition, two tv films, a tv special, and a movie were created.

Many of the inventions the Jetsons used are currently being produced today. A flying car will most likely debut in 2018. There are several start-up companies developing jetpacks to allow people to fly. Robot butlers exist at some hotels (Japan and California). Holograms have existed for a few years. 3-D printers can make food, and our current drones are similar to the pods the Jetsons used. Smart watches were also shown on the series; in one episode a student in Elroy’s class watches a Flintstones episode on his watch instead of paying attention to the teacher. Although The Jetsons was set in 2062, they featured moving walkways and smart homes which we have used for some time.

What is so surprising about The Jetsons is its current popularity.  A Jetson big-screen film is in the works and, in August of 2017, ABC ordered a live-action sitcom of The Jetsons. It will be interesting to see if they rely on the same technology used in 1962 on the show or if they project into our future.

While many of the popular shows from the early 1960s are only remembered by baby boomers, The Flintstones and The Jetsons are still well known to kids of every generation. They have truly survived the test of time. By this time next year, The Jetsons could once again be a hit television show. Like the Bewitched-I Dream of Jeannie debate, or the Mary Ann vs Ginger question, most people prefer watching the past or the future.  I am in The Jetsons camp, but enjoy watching Fred and Wilma from time to time also.  Next week we’ll look at my favorite adult animation show, and no, it’s not The Simpsons.